If Paul persecuted the church —

1 Corinthians 15:9  For I am the least of the apostles, and not fit to be called an apostle, because I persecuted the church of God.

Galatians 1:13  For you have heard of my former manner of life in Judaism, how I used to persecute the church of God beyond measure and tried to destroy it;

— how could he have begun it?

Galatians 1:11-12 11 For I would have you know, brethren, that the gospel which was preached by me is not according to man. 12 For I neither received it from man, nor was I taught it, but I received it through a revelation of Jesus Christ.

Ephesians 3:8-10 8 To me, the very least of all saints, this grace was given, to preach to the Gentiles the unfathomable riches of Christ, 9 and to bring to light what is the administration of the mystery which for ages has been hidden in God who created all things; 10 so that the manifold wisdom of God might now be made known through the church to the rulers and the authorities in the heavenly places. 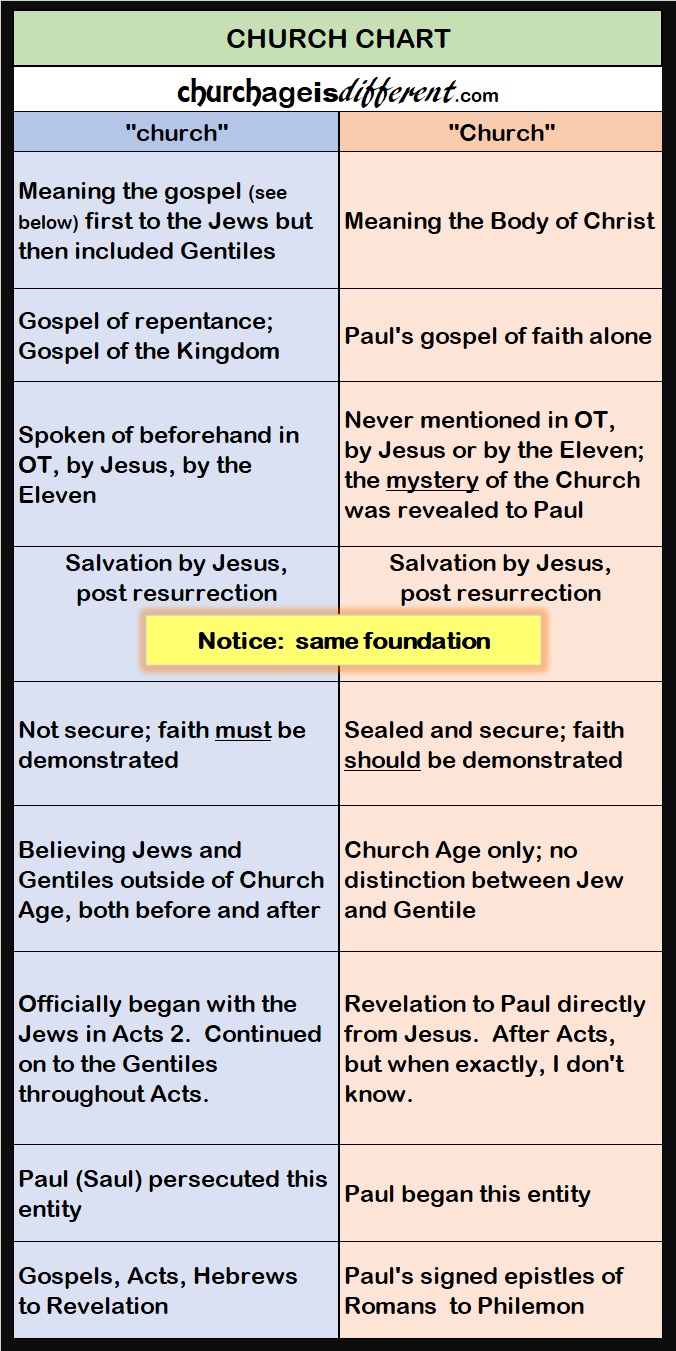 So once again:  If Paul persecuted the church, how could he have begun it?

Answer:  Because there’s a difference between the church that had already begun in Acts 2 (blue column) and what Paul was later given by revelation from Jesus (other column). 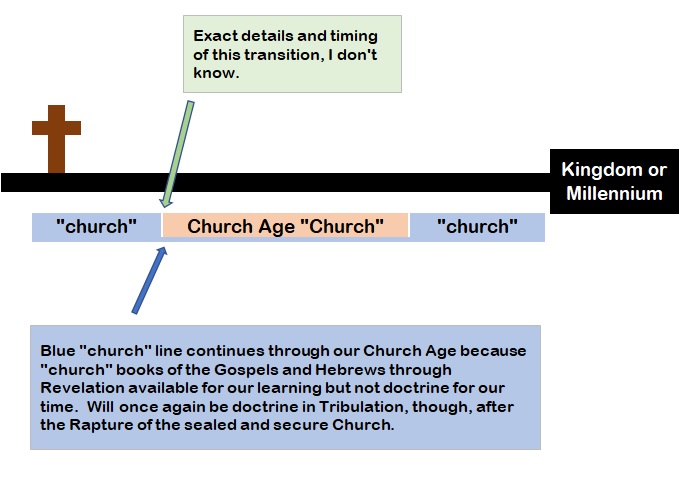 Now, I capped “Church” so we can distinguish between the two, but I think part of the reason it’s so hard to figure this out is that the Bible uses small ‘c’ church to mean three different things: the above two entities and simply a local gathering of believers like in Colossians 3:15-16.

Paul seems to have been saved into the church, and to have preached that same church in Acts.  But at some point in time he got his revelation from Jesus (Acts 26:16, 2 Corinth. 12:2 and Galatians 1&2) and began writing about the Church in his epistles.

Take a minute to go back and review the above chart.  The small ‘c’ church (no indwelling Spirit) that began in Acts 2 was foretold in the Old Testament would come — meaning Gentiles could now be included under the gospel of the Kingdom/repentance.  Notice who Peter’s quoting in Acts 2.  Old Testament Joel!  That Kingdom gospel was taught by Jesus and the Eleven, and is not what was later revealed to Paul and is not what he’s teaching in his signed epistles.  His gospel is faith alone, not kingdom/repentance.  His gospel was a MYSTERY revealed only to him, not back in Acts 2 (or anywhere in Acts, for that matter)!

Why the huge difference?  Because we’re indwelt by the Spirit.  We, the sealed Church, are a totally different entity, uniquely set apart from what’s before us and from what follows.  We’re not part of God’s reaching-the-world-through-Israel program.

The Holy Spirit’s role of indwelling ends at the Rapture, meaning once we’re gone, He’s back to his kingdom/repentance role of coming and going during the Tribulation.

See also The Eleven and Paul‘s Section III My Theory for the details on this.

See Salvation is Simple to find out how to become part of the Body of Christ, the Church!